Tisha Bav is the saddest day in the Jewish calendar. 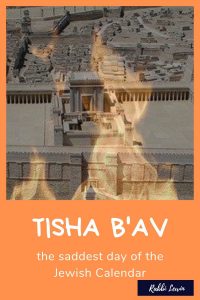 It is as if the Heavens have chosen this date as a time of perpetual destruction and sadness. So many tragedies befell our people on this day. The first and second Temples were destroyed. The fortress of Beitar, the center of the Bar Kochba revolt, fell on Tisha Bav, ending the three-year revolt against Rome and crushing the spirit of the Jewish People. No longer would there be a Jewish army -until the 20th century.

The expulsions from England in 1290 and Spain in 1492. World War 1 starting. So many tragedies are linked to this day. Why?

The Sages of old linked the events of Tisha B’av to the fateful night of the spies. The spies sent by Moses, return after 40 days and turn their back on the Land of Israel. The people cried that night. The Promised Land would be no more for them. Hashem said, “You cried for no reason. On this night you will have a reason to cry.”

And cry we have. For so long we have cried. We still cry today, for the world is still broken and hatred still exists.

Tisha B’av Forces Us To…

Tisha B’av forces us to confront the fact that there are things that are broken in this world. So much pain and suffering. So much sadness and hate. It was this hatred that destroyed the Temple and forced us into exile that continues until today. If the Temple is not rebuilt in our time it means that the sin is still with us and we still have so much work to do to bring love and brotherhood back to our fellow Jew.

Tisha B’av forces us to pause and remember. During the year we can get lost in the noise and become complacent with the lives that we live. But not on Tisha B’av. From not shaving or having a haircut, to not listening to music. We are reminded that there is something wrong. In the week leading up to Tisha B’av, we don’t eat meat or drink wine. We certainly sit up and take note that this is not the norm.

And then on Tisha B’av, we do not eat or drink for 25 hours. We sit on the floor and wear non-leather shoes like a mourner who sits shiva for a loved one. We read the book of Lamentations and the poems of sadness called Kinot. All this creates a mood of sadness, to experience the pain and loss of the Temple.

But it is through the pain, that we find the source of inspiration.

It is His story. Judaism teaches that Hashem is involved in the drama of human history. We may never understand it until the final act is revealed but we have faith that there is a purpose to it all. As I sit and reflect on the multiple tragedies that have befallen our People, I have two thoughts:

What Are Kinot? Why Do We Say Them?

This is what I think about on Tisha Bav. When I stand up at the end of the fast day, I am a changed person. I am ready to build a closer relationship with Hashem and his Torah. I am ready to start the journey to meet Hashem on Rosh Hashanah. From the depths of Tisha B’av, I see the lights of Tishrei.

Tu Bishvat – A Celebration Of The Land And It’s Fruit.

What Is The Haggadah and Why Do I Need It?