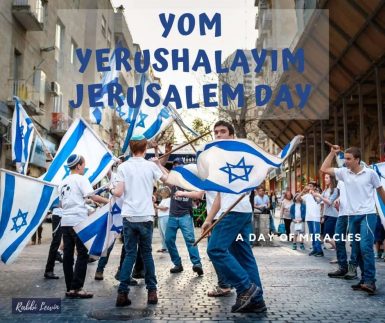 Yom Yerushalayim has a special place in many Jewish hearts. 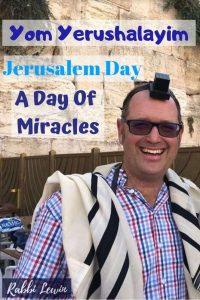 It’s the day we celebrate the unification of Jerusalem. Can you imagine the anguish of the Jewish people who would go to the Old City and climb up by David’s Tomb just to get a glimpse of the precious Western Wall? This was the reality for Israeli’s and the Jewish people up until the six-day war. In 1948, when Israel became the Jewish Homeland it also had to face the harsh reality that one of her holiest sites was off-limits to her people.

One of the highlights of anyone’s trip to Israel is to walk down the ancient streets of Jerusalem’s Old City down to the Kotel, The Western/Wailing Wall. For me and I believe for many others its an emotional short walk, yet one that should never be taken for granted.

For 1900 years Jews have turned to Jerusalem in prayer- ולירושלים עירך ברחמים תשוב-to Jerusalem with mercy You shall return. For 1900 years since the destruction of the 2nd Temple we ended our Pesach Seder with לשנה הבא בירושלים Next year in Jerusalem.

The miracle that was the establishment of the State of Israel left us with a divided Jerusalem in 1948. We could not pray at the Western Wall. The Jews were exiled from the Jewish quarter in the Old City and the ancient centres of Judaism in Judah and Samaria were locked and bolted. A Jew could not visit Hebron and pray at the tomb of the Patriarchs. Shechem at the tomb of Joseph and Beth Lechem the shrine for Rachel were all off-limits to Jews. And then the events of 1967. Watch now to get the full picture of the 1967 Six-Day War.

From the depths, we called out to Hashem and our prayers were answered. During the Six-Day War, the situation was grave. Israelis were, hard to conceptualize, preparing parks for cemeteries! In a short few days, we went from mourning to unbridled joy. הר הבית בידינו! The Temple Mount is in our hands! The Shofar is sounded at the Kotel by Harav Goren. AM YISRAEL- the Jewish People were reunited with its religious centres.

Today the Old City of Jerusalem is bustling with locals and tourists. The sounds of prayer from all faiths reverberates through the old city walls. For the first time in 1900 years, Jerusalem is open for prayer for all nations fulfilling the words of the prophet Isaiah Chapter 2

The word that Isaiah son of Amoz prophesied concerning Judah and Jerusalem.

In the days to come, The Mount of the LORD’s House Shall stand firm above the mountains And tower above the hills; And all the nations shall gaze on it with joy.

And the many peoples shall go and say: “Come, let us go up to the Mount of the LORD, To the House of the God of Jacob; That He may instruct us in His ways, And that we may walk in His paths.” For instruction shall come forth from Zion, The word of the LORD from Jerusalem.

Whenever I am in the Old City I love to visit this square. The reason for it is because of the story that takes place there in 1948. In 1948 the defenders of the Old City were forced to surrender and all the remaining Jews were forcibly exiled from the Jewish Quarter. The quarter was then ransacked and the synagogues destroyed. Before they left, one of the defenders scribbled the following words on the side of the wall.

Thus said the LORD of Hosts: There shall yet be old men and women in the squares of Jerusalem, each with staff in hand because of their great age.

And the squares of the city shall be crowded with boys and girls playing in the squares.

This unknown defender scribbled the words on the wall and today when you visit the same square there are pictures of the expulsion and then you look up and see an old person sitting on a bench as the children play soccer in the square. To witness the fulfillment of a biblical verse in front of one’s eyes is nothing short of amazing.

17 Tammuz, Start Of The 3 Weeks Of Mourning