Yom Hazikaron and Yom Haatzmaut Why Are They One Day Apart?

The miracle of the establishment of the State of Israel is one of the most amazing events in human history. A nation separated from its homeland for so many centuries and yet never forgot is unparalleled in history. Just three years after the Holocaust the Jewish People had a country of their own. A dream of millennia fulfilled in our time. Today we have added two new days to the Jewish Calendar –Yom Hazikaron and Yom Ha’atzmaut.

Every day, three times a day, Jews pray to Jerusalem we shall return. We face Jerusalem in our prayers. When we recite the Birkat Hamazon- Grace after meals- we reference Jerusalem. When a Jewish couple is married they face Jerusalem. And as we said just over a week ago in the Pesach seder, “Leshana Haba Biyerushalayim” – next year in Jerusalem. 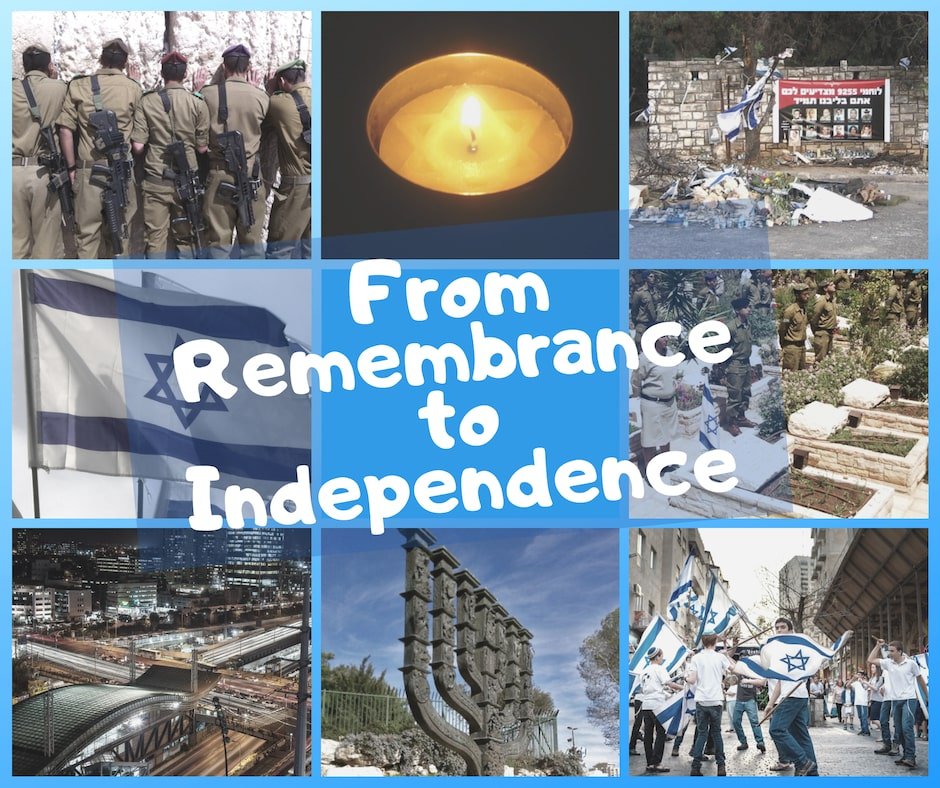 We merited to see that day. And since the establishment of the State of Israel, we have witnessed untold miracles. Events that were seen by the prophets of Israel have come true in front of our very eyes. The gathering of Jews from all four corners of the world. The land of Israel absorbing millions of Jews.

How the land has once again become fruitful. The streets reverberate with the sounds of Torah study and prayer, song and laughter. We see the fulfillment of so many of the biblical prophecies. How can we not celebrate the miracle of the Birth of the State of Israel?

However, the day before Yom Ha’atzmaut, is one of the most difficult days in the Hebrew Calendar, Yom Hazikaron. A day to remember those who have given their lives fighting for Israel or who were murdered for being a Jew in Israel. Why choose the day before Yom Haatzmaut to commemorate the fallen? It is so hard to move from such pain to unbridled joy. And yet this is how the days are set.

To understand the reasoning we need to go back to the birth of the State. On the 14th of May 1948, David Ben Gurion declared in Tel Aviv, the independent State of Israel. The reason the State was declared in Tel Aviv and not Jerusalem, was because at that time Jerusalem was besieged. On the 13th of May 1948, the area to the south of Jerusalem called Gush Etzion was conquered and the defenders murdered. Ben Gurion, when he declared the state, promised, that the defenders of Gush Etzion would never be forgotten. This was the birth of Yom Hazikaron, to recall not only the defenders of the Gush but all those who gave their lives in the defense of Israel.

The warriors and fighters of Israel, were, as Israeli poet Nathan Altermann described, the silver platter on which the State was given to us.  As we celebrate the miracle of Israel, let us pause to recall those who gave their lives for this gift. May their memories be blessed.

The Earth grows still.
The lurid sky slowly pales
Over smoking borders.
Heartsick, but still living, a people stand by
To greet the uniqueness
of the miracle.

Readied, they wait beneath the moon,
Wrapped in awesome joy, before the light.
— Then, soon,
A girl and boy step forward,
And slowly walk before the waiting nation;

In work garb and heavy-shod
They climb
In stillness.
Wearing yet the dress of battle, the grime
Of aching day and fire-filled night

Unwashed, weary unto death, not knowing rest,
But wearing youth like dewdrops in their hair.
— Silently the two approach
And stand.
Are they of the quick or of the dead?

Through wondering tears, the people stare.
“Who are you, the silent two?”
And they reply: “We are the silver platter
Upon which the Jewish State was served to you.”

And speaking, fall in shadow at the nation’s feet.
Let the rest in Israel’s chronicles be told.